Feen is a member of the board of the International VAT Association (IVA) and Director of international Value Added Tax specialist ALLVAT Representative B.V. in the Netherlands and spoke to goldnews after addressing the Forum.

With a focus on supply chain VAT, Feen suggested that it was often difficult for companies to understand their obligations when it came to their obligations in this area. While some larger multinationals may have their own experts, for smaller businesses, navigating an ever-changing VAT landscape, and overseas legislation, was much harder, he explained.

“Supply chains have been in place for ages, from the caravans going to Asia. There have been supply chains forever,” Feen said, adding, “If we look at my focus area, VAT, I see that it is very difficult for companies to comply with their VAT obligations” within Europe and beyond.

This is where bringing in expert help was essential, Feen suggested, “On a day-to-day basis, companies should not be focusing on VAT. They have their own businesses to run. If you are a butcher or a manufacturer of toys, you should focus on your regular business. But, the VAT obligations imposed on companies all over the world distract them from their normal business, and require expertise.”

He said this was because legislation both locally and on an international level was constantly changing and becoming more complicated, so harder for companies that did not have particular VAT expertise to understand and properly implement.

Feen went on to say that the European Commission was responsible for the creation of new legislation or proposals for new legislation for supply chain VAT on a European level. As well as identifying a need to combat VAT fraud, the Commission had also realized how difficult it was for smaller companies to do cross-border business, Feen said. “And so they’ve put in place several measures, several simplifications to enable the smaller companies to do trade with customers, consumers in the rest of Europe,” he continued.

Despite the Commission’s efforts to simplify the law, Feen noted, changes and simplifications were usually not incorporated into local law immediately as individual countries also had their own points of interest within the legislation.

“Also, if you look at the simplification, it may end up in just a few articles being changed but then if you look at the explanation of the simplification, then we’re talking about hundreds of pages,” Feen cautioned, adding that most small businesses did not spend their time reading legislation or explanations on a day-to-day basis or indeed have the means of understanding it.

Feen said that from a supply chain perspective, all this had made things more difficult. “We’ve also moved away from a final system. If we look at the European legislation which is also relevant to Cyprus, we were looking forward to a definitive system. It should have been the final system put in place starting this calendar year. But the negotiations between the Member States to accept and agree on that final definitive system are in the freezer now, so there will be no definitive system,” he said. “And as a result,” Feen continued, “If I look at the trade within the European region, it means that we will continue to work with the transitional system we put in place in 1993. So, we’re still working with old rules that have been updated and updated and updated, with the explanation we gave on simplifications that are, in fact, not simplifications.”

While trade and VAT compliance has become simpler for some through measures such as the introduction of the e-commerce packages, Feen suggested that anyone interested in doing cross-border trade should connect with experts, locally and internationally, to help them navigate what he described as a “maze” of legislation.

“It has not become easier and I’ve been in VAT since 1996. I can call myself an expert and I really, really have to dive into the legislation to really, really understand what it means,” he shared.

This was also why Feen decided to specialize in supply chain specifically and not also deal with VAT in other sectors such as real estate or financial services, because it is impossible to become an expert on all of them.

As a board member of IVA, established the year after the current VAT system was introduced by the EU, Feen said the organization supports businesses and members in their discussions with the authorities.

He also said IVA provided input to the European Commission and was keen to expand around the world, including to India, which, Feen noted, was itself almost the same size as the EU and very interesting from a VAT perspective. Discussions are underway with the UAE with expansion efforts also underway in North, Latin, and South America.

“We want to start chapters because we have members all over the world,” Feen said, noting that it was not always possible for members to personally attend IVA events.

He also welcomed the creation of the Cyprus VAT Association (CYVA), which organized the forum, underlining the value of such a resource for local businesses, just as IVA was an important resource for its members around the world.

CYVA was established in 2019 with the aim of providing a unified and independent voice to all professionals and businesses in Cyprus on VAT matters. 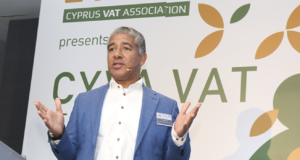